August 11, 2014 - AEG Power Solutions Group today announced preliminary results for Q2 2014.
Group results for Q2 2014
AEG Power Solutions finished Q2 2014 with €54.4 million of orders and €52.7 million in revenue. Compared to Q2 2013, orders were down 13.6% (€62.9 million) and revenue was down 3.5% (€54.6 million). Variance is expected and mainly driven by the difficult market environment in Solar and the impact of certain closures and divestitures.
EBITDA came to -€9.2 million (Normalized EBITDA (excludes capital gains and restructuring costs): -€5.4 million), an improvement of 11.1% from Q2 2013 EBITDA of -€10.3 million (Q2 2013 Normalized EBITDA: -€8.6 million). The negative result reflects low Renewable Energy Solutions (RES) revenue
and provisions for certain renegotiated payment conditions with suppliers, relatively high one time inventory and bad debt reserves and provisions. Positively, the quarter just reflects the first savings gained from restructuring and reductions in the overall operating expenses.
The sales of both skytron and the Group's affiliate in Bangalore, India were closed on July 3 and July 31, 2014 respectively. "Both disposals represent milestones in the operational reorganization process of the Group as we refocus our scope and efforts on our core businesses and markets", explains Jeffrey Casper, Chief Restructuring Officer of AEG Power Solutions. "The Company does not intend to make further major divestments but is now under way to make the difficult transition to tackling the deep rooted inefficiencies in the core businesses which have been underperforming and undermanaged for a long time."
The Group has taken serious measures to reduce its global and corporate cost basis but will need to take further measures in Q3 and Q4. Selling, general and administrative expenses for the first half-year were reduced by €7.8 million (including €2.5 million one-time professional fees) while gross R&D expenses were reduced by €3.8 million. After layoffs and divestitures, total headcount will be reduced to significantly below 1,000 by year-end 2014 compared to 1,521 at year-end 2013.
The financial restructuring that was approved by bondholders and shareholders will reduce the financial obligations of the Group by more than €50 million. The change of the conditions of the new €50 million bond to be issued on or about August 26, 2014 in exchange of the old €100 million bond will lower the interest charges and extend the maturity of the bond to August 29, 2019. The combination of asset sales, closing of affiliates, reduction in fixed operating expenses and lower interest through restructuring of the Group's financial commitments are all intended to bring the remaining core activities of the Group
into a sound financial position.
As at June 30, 2014, the Group maintained €23.9 million in cash and cash equivalents.
Renewable Energy Solutions (RES) 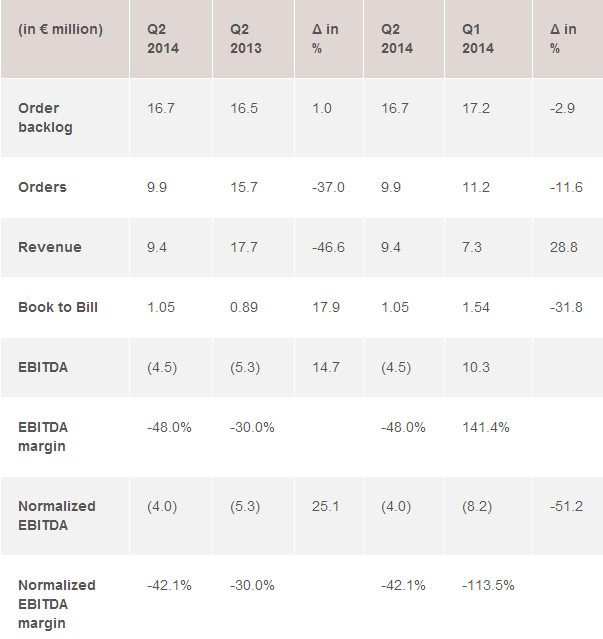 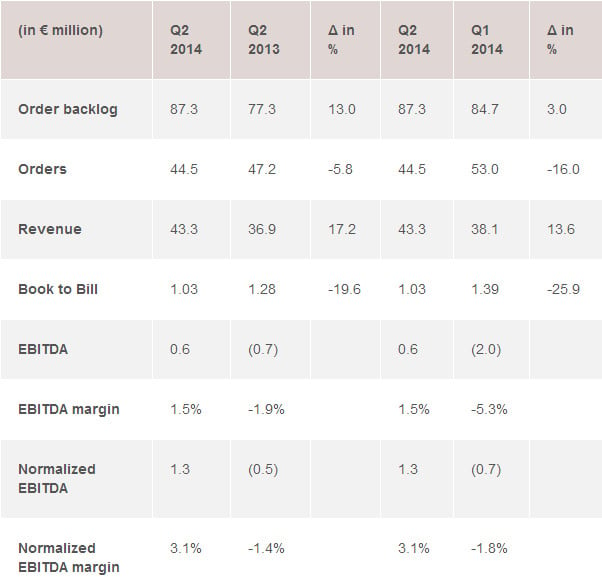 Orders in EES were €44.5 million in Q2 2014, down 5.8% year-on-year (Q2 2013: €47.2 million). The order backlog stood at €87.3 million in Q2 2014, up 13.0% year-on-year (Q2 2013: €77.3 million). EES had a strong order intake in Industrial Power Solutions. AEG Power Solutions is perceived as a reliable solutions provider to the variety of our international customers in these markets. The Company experienced growth in Asia, Europe and the Middle East. Revenue was €43.3 million in Q2 2014, up 17.2% compared to the prior year (Q2 2013: €36.9 million), following the high order intake in Industrial Power Solutions during the first quarter of 2014. The resulting EES backlog at June 30, 2014 predicts a solid revenue development also for the next quarter.
EES EBITDA in Q2 2014 was €0.6 million (Normalized EBITDA: €1.3 million), up from -€0.7 million in Q2 2013 (Q2 2013 Normalized EBITDA: -€0.5 million).
Outlook
Although considerable progress has been made in the restructuring of the Group, many risks remain. The timing and completion of the major steps of the divestment and closure of some main locations is largely complete. However, these actions are still not sufficient to provide a sustainable and healthy core. Further measures including additional reduction of central costs, business process redesign in the core industrial business, further operational improvements and discontinuation of certain non-core business activities must be implemented in the next six months to reach a base of activities where the Company can sustainably and profitably compete.
During the next few months, it is imperative that the Company is able to gain access to the necessary trade credit and improve its working capital situation. The Company must fully restore confidence of customers and suppliers and counter act tactics by competition to weaken our position and avoid the erosion caused when companies experience financial distress.
Although having a much clearer view compared to the beginning of the restructuring the ability to provide a reliable forecast is still extremely challenging. The Company now expects revenue for 2014 to be in the range of €190 - 210 million and a negative Normalized EBITDA. The medium term goal remains to have top line growth in mid-single digits and an EBITDA margin of 5-10%.
Dr. Dirk Wolfertz, Chairman of the Board of Directors comments, "While we have made a lot of progress in our restructuring efforts in a very short time, both operationally and financially, restoring confidence with our business partners remains of utmost importance to us in further solidifying our core end markets." Jeffrey Casper, CRO of AEG Power Solutions added, "In doing that, reaching base competitive business with sustainable profitability will remain key priorities for the Company."
Source: AEG Power Solutions
Profil ENF des Entreprises Mentionnées dans l’Article