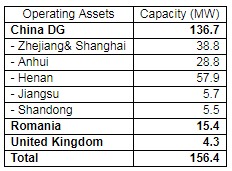 The Company currently has 17.6MW of completed projects for sale.